The Complete Jewish Study Bible is an expanded edition of the Complete Jewish Bible by David H. Stern. In addition to the Bible Text, it has over 130 articles aimed at connecting Christian and Jewish readers with the roots of their faith – God’s redemptive plan for his people provided through the promised Messiah, Yeshua. The Compete Jewish Study Bible contains both the Tanakh (Old Testament) and the B’rit Hadashah (New Testament) along with a treasure of helps for personal and congregational reading.

For Christians desiring to know more about the Hebrew roots of their faith, the Compete Jewish Bible presents and easy-to-read translation of both the Old and New Testaments as one continuous story of redemption. Using transliterated Hebrew names for people and places and a limited selection of Hebrew terms, this translation finds the Hebraic understanding that first century believers in Yeshua would have understood.

First, this is the Complete Jewish Study Bible. Thus, the Old Testament, or Tanakh, is in the order normally found in Jewish Bibles. The term Tanakh is actually an acronym from the three Hebrew letters Tav, Nun, and Koph. These are the first letters of the three sections of the Hebrew Bible, the Torah (Law), the Neviim (Prophets), and the Ketuvim (Writings) – the exact thing that Jesus said spoke about him (Luke 24:44).

15(18) All the people experienced the thunder, the lightning, the sound of the shofar, and the mountain smoking. When the people saw it, they trembled. Standing at a distance, 16(19) they said to Moshe, “You speak with us; and we will listen. But don’t let God speak with us, or we will die.”

This indicates that, in the verse numbering of the Hebrew Bible, it is Exodus 20:15-16. The numbers in parenthesis () indicate that in standard Christian Bibles, these are verses 18-19. Also notice that the proper names are transliterated Hebrew – Moshe (Moses) – and that key Hebrew words like shofar are shown in italics. That won’t be a problem, because there are two glossaries in the back of this Bible – one of Hebrew words and names into English, and one of English words and names into Hebrew.

5 1(4:21) Shlomo ruled over all the kingdoms from the [Euphrates] River through the land of the P’lishtim to the border of Egypt; they paid tribute and served Shlomo as long as he lived.

In this case in 1 Kings, in the Hebrew Bible this is chapter 5 verse 1. However, in standard Christian Bibles it is chapter 4 verse 21. Also notice the transliterated proper nouns Shlomo (Solomon) and P’lishtim (Philistines), and that the word “Euphrates” is not found in the Hebrew text but has been added for clarity.

In the New Testament, things are pretty normal if you are used to the standard Christian Bible. There is no change in the book order or in the verse numbering.

Whenever the proper name of God, Yahweh, is found in the Old Testament, most Christian Bibles show it as LORD in what are called small capitals. The Complete Jewish Bible follows a similar convention, using the Hebrew word ADONAI all in small capitals. And in the New Testament, the name of the Messiah is properly shown as Yeshua rather than Jesus. You will find a few other familiar names in Hebrew instead of English as well, such as Yochanan (John), Kefa (Peter), and Sha’ul (Saul or Paul).

There are more than 100 themed articles that help the reader understand the historical and cultural context of the Scriptures. The articles are organized into twelve themes:

In addition, there are more than 30 informative articles by scholarly writers covering a variety of other subjects, like The Menorah, The Tongue and Leprosy, PaRDeS, The Good and the Evil Eye, and Yeshua and the Jewish Tradition to name a few. A section of Biographies of Rabbis and Sages and short biographies of the contributors of the articles is given as well.

The first five books of the Complete Jewish Study Bible are divided into the 54 traditional Portions, or Parashot, in addition to the chapter and verse markings. These are normally read publicly in the synagogues every Sabbath. Each Parashah is identified by name in Hebrew and English, and at the end of each Parashah are the Haftarah (readings from the prophets) and suggested B’rit Hadashah (New Testament) readings.

In the back of this Bible is a complete listing of the 54 Torah Portions (Parashot) by name, with the Torah and Haftarah readings and suggested B’rit Hadashah readings all in one chart. Following those are additional readings for the Festivals, Feasts and Fasts.

These readings are on an annual cycle that begins following the Feast of Tabernacles in the fall. Following this cycle, Jewish worshipers all over the world are reading and studying the same thing each Sabbath. If you are not familiar with the Torah Portion readings, check out this short article.

The Complete Jewish Study Bible will help Christians to gain a deeper understanding and appreciation for the Hebrew roots of their faith. The Kosher Christian highly recommends it.

Here is a brief video from Christianbook.com describing the Complete Jewish Study Bible: 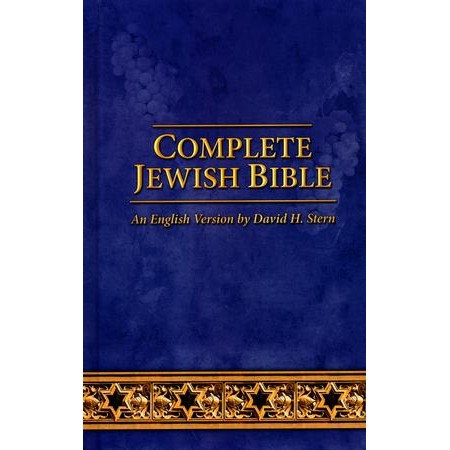 As an Amazon Associate I earn from qualifying purchases.

The Complete Jewish Study Bible will help Christians gain a deeper understanding and appreciation for the Hebrew roots of their faith. We highly recommend it.